* Repetitive routines or rituals
* Can engage in tasks (sometimes mudane ones) for hours and hours
* Flat, or blank expression much of the time
* Doesn't always recognize faces right away (even close loved ones)
* Strong sensitivity to sound, touch, taste, sight, and smell (e.g. fabrics—won’t wear certain things, fluorescent lights)
* Sensitivity to the texture of foods
* Eccentric personality
* Idiosyncratic attachment to inanimate objects
* Being "in their own world" / Preoccupied with their own agenda
* Highly gifted in one or more areas, e.g. math, music, etc
* Single-mindedness
* Likes and dislikes can be very rigid
* Can spend hours in the library researching, loves learning and information
* May have difficulty staying in college despite a high level of intelligence
* Limited interests / Intense focus on one or two subjects
* Unusual preoccupations
* Collects things
* Early in life they often have a speech impediment
* Clumsiness / Uncoordinated motor movements
* Speech and language peculiarities / hyperlexia
* Non-verbal communication problems: difficulty reading body language, facial expression and tone
* Word repetition (they may frequently repeat what you've just said)
* Excellent rote memory

In Relationships (these mainly pertain to AS men in relationships. Sorry to split along gender lines but there are differences.)

* Can often be distant physically and/or emotionally.
* Often are attracted to another purely because they are attracted to him
* He has a hard time saying I love you, showing physical affection; as a result it is difficult to find out if they do love you
* He can be very critical and takes it personally if she won’t wear something he likes, or wears something he dislikes
* Can stop putting any effort into relationship after a time, and doesn’t understand why she then stops giving too
* Often times they will make no motions to keep a relationship (be it friendship, or something more) going
* They won't call, and you might not see them for days. That doesn't mean they don't care.
* He will do what he thinks is best for the both of them but seldom talks to her about her feelings or opinions
* If she tries to share her love for him, he may find her need to “connect” smothering
* His attention is narrowly focused on his own interests
* Men with undiagnosed AS often feel as if their partner is being ungrateful or “bitchy” when she complains he is uncaring or never listens to her
* He can become quite defensive when she asks for clarification or a little sympathy. The defensiveness can turn into verbal abuse (usually not physical abuse) as the man attempts to control the communication to suit his view of the world.

FOCUSING ON THE POSITIVE:

1. Focus and diligence – The Asperger ability to focus on tasks for a long period of time without needing supervision or incentive is legendary.
2. Internal motivation – as opposed to being motivated by praise, money, bills or acceptance. This ensures a job done with conscience, with personal pride.
3. Independent, unique thinking – people with AS tend to spend a lot of time alone and will likely have developed their own unique thoughts as opposed to a ‘herd’ mentality.
4. Higher fluid intelligence – scientists in Japan have recently discovered that AS children have a higher fluid intelligence than non-autistic children. Fluid intelligence is "the ability to find meaning in confusion and solve new problems. It is the ability to draw inferences and understand the relationships of various concepts, independent of acquired knowledge.” (Wikipedia 2009) Experts say that those with AS have a higher than average general IQ as well.
5. Visual, three-dimensional thinking – some with AS are very visual in their thought processes, which lends itself to countless useful and creative applications.
6. Attention to detail – sometimes with painstaking perfection.
7. Honesty – the value of being able to say “the emperor isn’t wearing any clothes.”
8. Logic over emotion – although people with AS are very emotional at times, we spend so much time ‘computing’ in our minds that we get quite good at it. We can be very logical in our approach to problem-solving.

Foreword
Introduction
1 - Imagination, Self-taught Reading and Savant Skills, and Unusual Interests
2 - Why Smart Girls Sometimes Hate School
3 - Sensory Overload
4 - Stimming, and What We Do When We're Happy
5 - On Blame and Internalizing Guilt
6 - Gender Roles and identity
7 - Puberty and Mutism
8 - Attraction, Dating, Sex, and Relationships
9 - Friendships and Socializing
10 - Higher Learing
11 - Employment and Career
12 - Marriage and Cohabitation
13 - Having Children
14 - Ritual and Routine, Logical and Literal Thinking, Bluntness, Empathy, and Being Misunderstood
15 - Diagnosis, Misdiagnosis and Medication
16 - Depression Meltdowns, PTSD, and More about Meds
17 - Temper Meltdowns
18 - Burning Bridges
19 - Stomach Issues and Autism
20 - Getting Older on the Spectrum
21 - On Wether Asperger Syndrom is a Disability or a Gift, and Advice from Aspergirls to Aspergirls

ADDITIONNAL TOOLS FOR PARENTS
22 - Give Your Aspergirl somme BALLS: Belief, Acceptance, Love, Like, Support
23 - Thoughts and Advice from Parents of Aspergirls 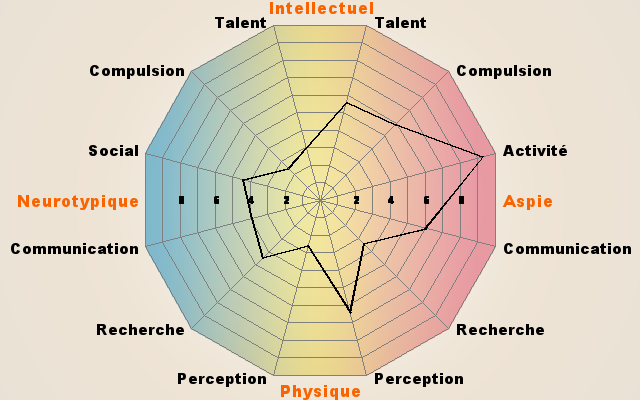